The 2014-2015 open water season officially began on Sunday, November 23rd in San Pedro, with a touch of change regarding the usual yearly opening in Baradero. This year, the plentiful and intense rain did not only spoil the opening season of the traditional aquatic marathon in Baradero, but also grievously damaged the area and its people. Fortunately, we – the swimmers – sought a way to get even with a brilliant sunny day in the city well known for her beautiful riverbanks on the Paraná as well as for her deliciously juicy oranges.
The administrative organization ran without mishap and with absolute swiftness. Within few minutes, we had our numbers tattoed on both arms and were given the kit bags which were alphabetically ordered and neatly placed on the wall.
Under the intense sun, the pep talk gathered us all the eight-kilometre open water swimming participants while we were finishing to spread suncream and vaseline on the whole body. 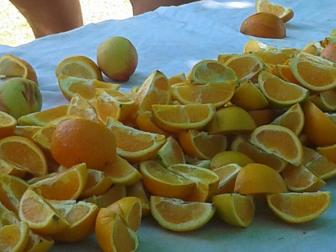 The buses, which took us to the takeoff, were promptly parked outside theYatch Club venue. The sampedrinos (name used to address the local people) still do not get used to seeing a landscape of half-nacked men and women popping out of the bus windows on their way to the camping-site for the takeoff. The first theme “sung in tune” by the most passionate supporters to encourage the swimmers was the national anthem in its already classic vocalized version “oooo oooooooooo”, which is usually heard to cheer the national teams in Argentina.
When we arrive at the stream which flows into the San Pedro Gill, the boats, the lifeguards and the small vessels were ready to accompany us all the way down. Then, it was the swimmers´turn. The most respectful ones usually listen to the organizer´s instructions attentively although there is never any shortage of rushed ones whose cap tightness impairs their sense of hearing.
It is invaluable to swim knowing that you are surrounded by security measures, which should be the first point to consider in such a sport competition.
In spite of the fact that a bus had a puncture – a sort of stroke of bad luck which could have been avoided with a previous vehicle service – and the fact that it delayed the takeoff a little, the siren was blown and off we went: all in search for the current which flows downstream along the middle and eases the effort of the body. Except for some camalotes (aquatic plant) along the way, the river was friendly and cool, as usual.
After the raging initial struggle to position and to find a place in the river, you have time to take your mind off and to get focused. With your head facing the bottom, your arms pushing and your legs pounding strongly, there flows a natural connection with the environment – not even a cow I found! – with the rest of the swimmers and with one´s self. Beyond some repetitive chorus which flows like a broken record of some movie soundtrack, thoughts flow on board. That is how one remembers the loved ones – it is comforting to know that my sons will be waiting for me - each crack of dawn challenging our mood and the energy devoted to training, the pertinent instructions of the coach, familiar faces, and even work issues, some business trip, unsent mails…all in a chaotic yet free line of thought.
In the meantime, I performed a body scan to check its state. I was beginning to feel the effort of each muscle in my arms and back – above all, when I took note that I had won and lost a volleyball match against my eldest son the previous day – an absolute fun which I had not evaluated promptly as a sign of carelessness.
The first sense to be severely impaired by the rhythm was the smell. An intense scent of a well-done chorizo (similar to a spicy pork sausage) invaded my nose and automatically got to the brain. That activated the circuit which fuels each step of the race: my mind read the nearness of neighbouring campsites jampacked with people getting together over an asado (somewhat similar to a barbecue) as being close to civilization, time to speed up. I changed into fourth gear, checked my bunch of mates, looked for each cap travelling near me to spot the bubble-gum pink one, which was now ahead of me, and the blue and black ones on the sides – references which you want to share impressions with at the end of the race, but get lost in the racket and relaxation upon arrival. I headed for the young woman in pink cap - who had gotten past me – until I spotted the warship on the right riverbank, one kilometre away from the local Yacht Club.
The last stretch is swum on a static and freezing-cold stream involving a somehow greater effort to begin with the final sprint. There comes the mayhem again, there returns the nerves, the happiness for being closer, the final exhaustion, all mixed to flow neatly into the arrival tunnel.
Displayed on tables were the oranges and peaches cut in pieces and easy to sink your teeth into – which were voraciously eaten after such big effort. Some shadow, some relaxation, a good bath, a nice chat, the fondness of our friends and beloved ones is what makes us get back on track.
Once more, I feel joyful for having been able to meet the challenge. I cannot help thinking about how long I will be doing this. It is then when I deeply appreciate the physical integrity, the pleasure of a sport, healthy competition, and also when I thoroughly take note of the effort made by those suffering from motor disability who end up shaping a personality of struggle, courage and determination. Or when I see a role model shaped in a seventy-seven-year-old man who takes part in such a challenge and receives a warm applause from the competitors and I show my deepest admiration.