That Sunday in Paraná was cloudy at dawn. We got ready to be at eleven thirty at Club Estudiantes, the place where the buses to Villa Urquiza would leave and where once there, we would embark on the trip to get to the start line to assist our swimmers.
We brought some beverages and food to share with our boatmen (in my case, also for the boatman’s son, who was so nice!) and the essential: the HELPERSTICK TO HYDRATE AND FEED THE SWIMMER. ¨Thank you Swimmers!!” 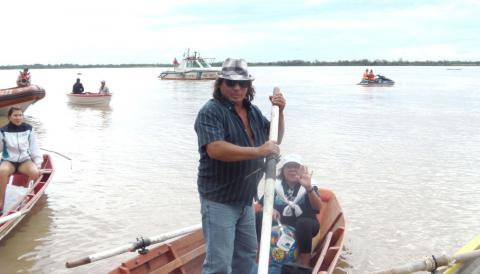 We arrived, we settled in and we waited on the riverbank having torn feelings: anxiety, on the one hand and happiness, on the other.
The swimmers for the twenty-one-kilometre race left for the start line and the assistants – now called “trainers” – remained there to be assigned the boatman. Quite a commotion was stirred up because, in some cases, the ones who had participated at some other race preferred the same boatman as that other time – an utterly understanding attitude. Once the situation was solved…we were ready to set sail! I must confess that, at the beginning, I got a little scared with the boat but I luckily overcame the feeling pretty soon – it must have been as a result of being so inmersed in my task as an assistant.
Going upstream, we arrived at the start line, we waited anxiously for the cannon shot and, as cool as I could be, I focussed on my first task: to go to meet Victoria, my swimmer.
We could fortunately spot her quite easily! How happy I was to see her! The boatman and me shouted at her several times (I even got to wave a little beach towel I had brought to sit down) until she finally looked up and saw us.
It was at the beginning of our journey when I realized that we depended entirely on the boatman, on his expertise and knowledge of the river. I tried to keep calm so that I would not become annoying and ask him the same questions a hundred times, “Are we doing fine?”
I am satisfied with having fullfilled well my task of hydrating and feeding Vicky, my swimmer, and of having conforted her with that sweetness typical of me (at one point, Vicky asked me as if she was a little girl, “Do I have to eat this?” – referring to the Powergel – and I replied, “Yes, you have to do it!”).
It was really an awful afternoon: the smoked grey of the clouds turned lead grey with drizzle. The swimmers, luckily, seemed unaware of the weather: Victoria, at least, then told me that she had never noticed it had been raining. In my case, that beach towel I used for Vicky to spot us ended up being extremely useful when it started to drizzle and then to rain.

In spite of the harshness of the weather and of Victoria’s several cramps, my friend succeeded in bringing – as it could not be in any other way – her well-earned medal.
Although the cold weather remained with us most of the time, it did not prevent me from feeling sheer happiness for having assissted Vicky in making her dream come true. I hope she has felt likewise.

After saying farewell to the cold weather with a good and conforting hot shower, the best was still to come: the delicious and abundant dinner we would be sharing with the Swimmers team.

Farewell, Paraná. Next year, we will be there once again to share another adventure with the same expectations, emotion, joy and anxiety as usual.