2013-03-12
NEVER AFTER LUNCH
The “Yaguarón Challenge” brought together a hundred of swimmers who had to cope with the cold weather on Sunday, March 3rd. A comfortably eight-kilometre open water swimming, without sun on the horizon and feeling well-taken care of in the river.

Challenge is putting up with swimming in a river for an hour on a cloudy and cold day, inviting you to pull the zipper’s sweatshirt up past the neck rather than wearing a bikini to soak oneself in the water.
The endlessly four-hour gap between entry and start looked more like a chewing-gum. The five daring swimmers of Swimmers, always hoping fruitlessly for a ray of sun to warm the day, lay down over some beach wraps on the wet grass.
The car served us as a shelter for the cold weather when it was hard to be in good spirits in the open. A lengthy chat about the content of the barbecue of the following long race in the Paraná river entertained us till the time to grab a bite.
Before swimming, most people usually gobble some cold spaghetti o tasteless rice to energize the body. I am never one of those, since races are scheduled at midday and I’d rather eat afterwards, long past lunchtime. Yet, races usually get delayed and the meal at lunch ends up being the five-o’clock tea-time - with luck.
Given the fact that this race was scheduled at 3pm, I could not see myself ingesting something so many hours later. And that is how I took out my plastic container which had boiled rice, basil and nuts. After the seventh mouthful, we looked among us bored with chewing this nourishing but humdrum appetizer, which would become an unforgettable heavy feeling for my slow digestion. 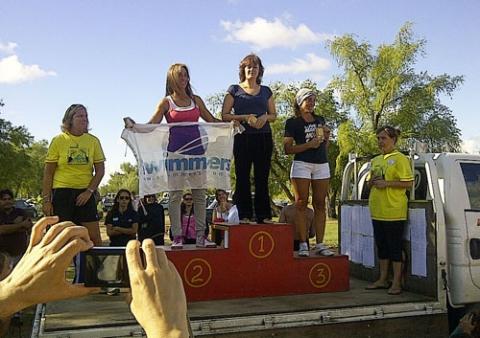 My mood looked disrupted by the real feel temperature and by the fact that the woman at the changing room had previously confirmed to me that there was no hot water – outrageous!
At the time scheduled, we got on the buses half-naked to travel eight kilometres to the start. A good emerald-oil bath, which my friend Julito usually brings with him, would have protected me from the harsh weather but I was afraid of shooing away the rest of the passengers with that smell. Someone took to taking a call roll by ticking off the swimmers’ names on the list.
The water was cold and its deep brown was scaring. We swam a few metres to get wet and inmediately after, someone started counting down until we heard the whistle. Although we were piled in the water, I did not feel any worrying blows.
At that moment, I wondered why the race had been entitled that way and, slightly afraid, I began thinking about the homage we would be paying to the American gold-coloured feline which inhabits the swampy areas of America. I tried to change the subject quickly so that I could feel much better.
I set off stronger than expected. I felt accompanied by many colourful caps which I was spotting along the way so as not to move away from the bunch I was in; at the same time, I glanced steadily at the oarsmen who were accompanying us at each edge. Although jet skis are not easily visible when they come and go on the river to supervise the swimmers, they are indeed noticeable in the amount of water you swallow in the strokes after they go past the swimmers.
I did not visualize the route in advance but the Yaguarón is a branch which rises in the Paraná river, off San Nicolás. Unfortunately, the organizer had not warned us in the previous speech about the terrible winding course the river takes. When we reached some buoys and a lane – in pretty good condition, I may say- I got delighted for a second that I had reached destination, though the few people around me made me think otherwise.
The googles prevented me from seeing along almost the whole race so I had to make a great effort to figure out what was happening. There appeared Robert at the same crossroads. I followed him behind but I was still confused.
The rest of the bunch had taken on a shape different from the original one. Again, I had to change to the opposite direction when I noticed I was bound to crash against an edge. A while later, I realized I had swum letter-shaped and that there would be still a long way ahead. This uncertainty played a dirty trick on me, since I did not know whether to waste or invest the remaining energy on finishing the race.
I tried unsuccessfully to hum “Far away, far away” because I was focussed on the doubt. Trying to demist the goggles once again, I asked the nearest oarsman how far away I was - a tough bet in those circumstances, since the answer can be determining to either choose knowing the depth of the river or keeping swimming until your limbs go numb- “700 metres”, he stated. My face lightened up with happiness because I was already feeling tired. I swam happily but painfully.
A while later, not seeing the finish-line and feeling the complaint of biceps and triceps, I concluded that I swam those metres much faster than what my perception was allowing me to remember. I tried to refresh my chat with the oarsman and to check whether the number I had heard was the right one. I sought to cut inertia in the final sprint, I spotted the church at a reasonable distance; I wondered if it was the one my mother visited from time to time – so big, so modern, so different from the old buildings you are used to seeing. I dragged towards her commending myself to the Virgin and spotted the ones who had already gotten to the finish-line.
Fortunately, there are always helpers willing to assisst you to stand up right again when touching the sand with your hands. On the way, someone took to cut the barcode on my swimsuit, to offer me a delicious and juicy half orange and a bottle of water. Tati, the fattest swimmer among us all, would be waiting for us with dry, big towels. There she was! Smilig and triumphant, holding some snack vouchers which ended up being a super sandwich and more water.
Once more, I felt blissful for not giving in to my fear of such a harsh weather, to have invested on a whole day away from my family and to keep on being fit to indulge myself in being well-accompanied.

Big was Vicky’s and my surprise when we were getting out of the hot shower –there was hot water in the end- and we heard a voice on the loudspeaker announcing the names of the winners. We figured that he may be warming up his vocal chords, since only twenty minutes had gone by since we finished the race and had our comforting shower. Indeed, as we approached, we realized he was mentioning the winners.
In spite of a strangely improvised podium over a van – modern technology has finally reached the race circuits! Congratulations on this organizer who discovered the virtues of using a barcode for each swimmer, loading the data with a scanner once getting to the finish-line and asking “Mr. Excel” to be in charge of positioning the swimmers. All this was printed and pasted at the side of the podium in few minutes! It was great to know that there exists a person who can make good use of the technological advances, so aloof in other races where we usually have to wait an hour and a half to know the results. I felt as if I were in the First World; even, with the promptness to mention the winners of each category, which gave almost no time to take pictures to the winning trios.
For the first time, we had to put off the “mate” for later that afternoon and we ended up staying more time to enjoy a bit of the sun, which had come out almost at the end of the race.

Every organizer must be in charge of the facilities he or she offers as part of the price you pay for participating in the race. It should not be that complicating to have hot water and to avoid having floods in the restrooms. It is worth mentioning that in spite of all the effort the woman in the changing-room made, it was outrageous and prehistoric to see her carrying a lot of buckets of water from an external tap to flush the toilets. It was not in keeping with what you expect from an event like this one.