2015-11-01
SWIMMING ON ICE
With scarce attendance, on Sunday November the 1st, around three hundred swimmers opened the 2015 open-water season in the town of Baradero.

It was cool and cloudy at dawn but the hope that the weather would get friendlier was always with us. Groups of swimmers were scattered in the port where we gathered; there was plenty of space for everyone and there were even less sponsors. In fact, the four garbage trucks – the vintage means of transport we cannot do away with, as it seems– were enough to take us to the camping site where we would take off, two kilometres away from the port.
The cold wind blew on the river bank as we all fluttered about out of cold and trying to get warm – an almost dead duck.
The first feeling I experienced as I entered the water to get ready for the takeoff was just like an immersion bath containing 10 rolito bags (cold packs) to reduce some swelling. However, as hope is the last to leave for the courageous sportspersons of this discipline, we began to get splashed with water wildly to get used to it. Shoutings and screamings were heard at the camping site which started to fade away after swimming for a couple of metres with our heads popping out of the river. Our body immersed in the water left us speechless, without oxygen or bubbles…..
No matter how much sporting spirit we had in the sixty-metre -river width, each vein and muscle turned like ice packs where no liquid could possibly flow. 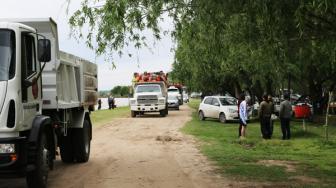 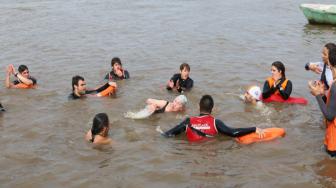 Searching for positive connection, I drove my mind into enjoying the pleasure of swimming surrounded by nature, without lanes, with a taste of earth, a smell of roasted meat and a landscape with farm animals. Yet, going past the port – where the people sneak a look at us and greet us – I hoped that the people who had come along would give off a heat wave that would make my mind get focussed. Has not anyone discovered yet a tablet that could keep your body warm like a kerosene heater?
I continued with the stern and the head fresher than ever. In the meantime, the men from the different categories, who take off a while later than women over twenty-five, started to make their presence felt. Their heavy, fast and noisy strokes became noticeable for the impact they have on different parts of our bodies.
The sun was still shy as my mind claimed for this part that is so rewarding to me. “It was much colder in Ice Age,” I comforted myself. When the most discouraging moment drew near, on the widest strait between both riverbanks, the limbs went numb like chicken after being twenty days inside the fridge.
The only solution I found to cope with the cold was to keep moving without overcharging any muscle, heading precisely for the only expected way out and with the possibilities of being hugged by a warm blanket: the SMATA camping site.
Seeing many kayaks placed diagonally – which had accompanied us all the way – I raised my head two seconds and heard the miraculous phrase: “only fifty metres remaining.”There came back the happiness and the strength, and I stroked wildly as if being desperate for some ravioli after having been in the jungle for thirty days, so to speak.
I was filled with emotion as I stood up. It had not been the physical dexterity that took me all the way to the end this time, but the mind that had taken on the leading role. The body expressed itself clearly as it recovered the upward position. Such is the case that the person who put me in upright position threw me into the arms of one of the organizers who took me into an ambulance without letting me even complain. I was wrapped in a huge blanket and a borrowed sweatshirt. There, they checked that everything was OK with me.
In search of my friends to celebrate our joint motivation, I went past the hydration stall and put a slice of orange between my teeth, since it had not dawned on anybody to offer a mouth guard to avoid filing them with so much shivering.
Having the loved ones and friends waiting on solid ground with their encouraging words (they should have read the whole Bible to me to heat me up), having a cup of coffee and a warm hug are always the best part of the event. Accomplished mission. Now there remained diving into the freezing cold water once more to swim along with my son….
The five-hundred-metre race for children, those who will continue our crazy adventure once we retire, was led by Enriqueta Duarte, the young eighty-six-year-old swimmer who keeps her boldness alive, that which has accompanied her all along. Not only did she swim across the Nahuel Huapi Lake but also took part in the international competition across the English Channel.